I can’t believe it’s a week since my last post. It’s not through lack of cooking/baking though so this post is a bit of a catch up with my River cottage bread baking experience and a few other things I have cooked and want to bookmark (plus share with you) for future cooking over the last 8 days.

I’ve been baking my own pizza’s from scratch for some time now to the point where I know longer look at a recipe to make the dough or remember where the recipe came from. But in the spirit of baking my way through the River Cottage bread handbook I followed the recipe in the book last week. I’m so glad I did! The River Cottage recipe uses half plain flour and half bread flour making the resulting dough much softer than I am used to and the end result was a perfectly thin pizza base. I also used a recipe in the book for garlic infused olive oil to make a garlic pizza bread as well. The topping in the photo above was spinach, feta and prosciutto. This pizza dough recipe was previously published in the guardian here.

I baked my first full sourdough bread last monday following the recipe in River Cottage Bread. It started with making the sponge the night before and then the following day I followed the recipe to make the dough and let it rise as directed. You can find a sourdough recipe here on Belleau Kitchen. The bread turned out well, I’m just not sure we enjoyed the sourness enough to be worth the time it takes to make sourdough. I’m still keeping my started alive as I think I will use it to try some recipes from Dan Lepards the handmade loaf but I’m not sure if I’ll make another sourdough (even though there are several different sourdough recipe I haven’t baked in RC).

I shared my secret to delicious, simple pasta sauces here.

I’ve updated my post on the malted grain loaf to include details of a very similar bread.

I baked a big batch of pikelets from the River cottage book. I love crumpets but don’t have any of the rings needed to cook them in. Pikelets are really simple to make and they taste delicious toasted spread with butter (the recipe made a lot so I froze most of them and I am happy to report they toast well straight from frozen). I can see these being baked a lot in my kitchen. 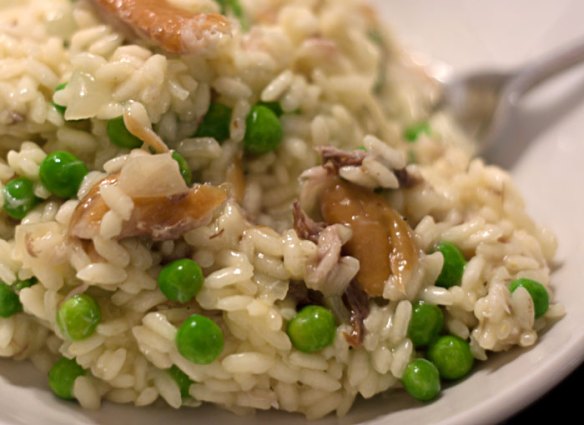 In an effort to eat more sustainable fish, I cooked a smoked mackerel risotto. I just cooked a basic, plain risotto and added frozen peas and flaked up smoked mackerel with the last ladle of stock and finished it off with a squeeze of lemon juice. If your looking for more of a recipe to follow you can find one here. 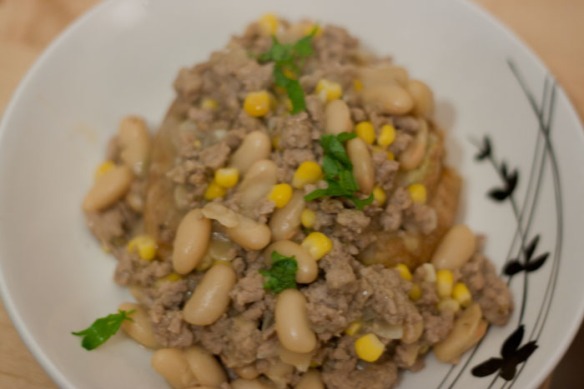 This dish has become a bit of an autumn/winter favorite in our house. It’s a slightly healthier take on a chilli con carne (which don’t get me wrong still has its place on our dinner table). I saw the recipe on an episode of Giada at home on the food network last winter, cooked it, photographed it, loved it, never blogged it! Why? I wasn’t happy with the photo/lack of time, I’m not quiet sure. Then the colder nights started to draw in and my cooking style changed and I remembered this dish and searched the internet to find the recipe. I’m still not happy with this photo I took lat week but then I remembered the whole reason I started this blog. Not to publish stunning food photos (although that would be nice) but as a way to save the recipes I want to cook again so they’re easy to find. This chilli is packed with flavour and heat, it freezes well and is a delicious, filling meal when served with ever rice or a jacket potato.

Based on this recipe from Giada De Laurentiis, Food network.

I don’t know about anyone else but I am loving the new River cottage series (channel 4, Thursdays, 8pm) and finding it very inspiring. Last weeks episode was on fish. I’m fairly new to eating fish, I hated it when I lived at home. These last three years of living with my boyfriend and really getting in to cooking has pushed me to try more and more fish. He loves his fish and seafood (except prawns which unfortunately I love). Now when we eat out I regularly order fish (I had a gorgeous risotto of saffron, shrimp, chorizo and peas with a fillet of sea bass on top a few weeks back which can eat every week it was that good). I’m starting to cook more fish at home too. I like recipes which give the fish flavour or where I can serve the fish with something with lots of flavour (I’m not keen on fillets of fish (particularly white fish) with simple potatoes and veg). 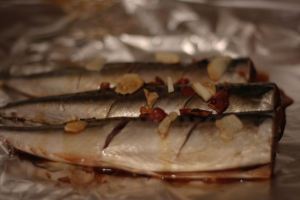 This summer we have eaten a lot of mackerel, that my boyfriend and his dad, have caught off the coast of Anglesey. Mostly I’ve cooked it quiet simply (I find mackerel much more flavourful than the white fish fillets I was used to, so simple was ok), either on the griddle or in a foil parcel in the oven with a bit of oil and lemon.  Then I saw River cottage last week, where Hugh also cooked mackerel in a foil parcel but as well as oil he added a fennel, fresh ginger, chilli, garlic, star anise and soy sauce. Inspired to try this idea, I put it to the test last night. I omitted the fennel as I personally don’t like it. The flavours were taken on really well by the fish and we both loved the recipe. I served my fish with some green beans (stir fried with some sunflower oil, grated fresh ginger and a splash of soy sauce) and some noodles. Hugh’s serving suggestions are noodles, mash or rice and some wilted greens, such as spinach, pak choi or choi sum which would equally be a perfect accompaniment. We’ll certainly be having this recipe again, it’s just a shame that this was the last bag of mackerel in our freezer.

I must confess to being a big fan of Bill Granger. I love his simple, laid back way of cooking and presenting. In this cookbook he presents over 100 recipes that are his favorite, classics (think coq au vin, spaghetti carbonara, fish and chips and ‘fried’ chicken) which he has worked his magic on, not only simplifying but also putting his spin on them to modernise them. Examples include fish and chips, where the fish is coated in bread crumbs and shallow fried (instead of battered and deep-fried), coq au vin which can be made in less than one hour and ‘fried’ chicken which is oven baked yet he says still has all the flavour of southern fried chicken (this recipe is next on my list to try, so I can not confirm this).

Of course there is a chapter on his trademark breakfasts as well as baking, soups, meat, seafood, chicken, vegetables, rice, pasta and bread, salads and desserts. The recipes all appear simple and straight forward, the photographs are stunning and Bill’s passion for food and good home cooking is evident throughout. 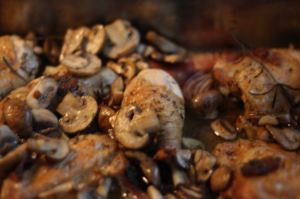 So far I have tried Bills coq au vin, which he cooked on Saturday kitchen (and is also in this months Sainsbury’s magazine) and the recipe can be found here.  The recipe was straight forward to cook and tasted delicious (it reminded me of this dish from his last book feed me now). I also cooked his fish and chips with tartare sauce recipe. The fish had a subtle hint of paprika which I really enjoyed and the chips were deliciously crisp on the outside and fluffy in the middle.

Thank you to Quadrille publishing for sending me a review copy of Bills basics.

Recipes I want to try