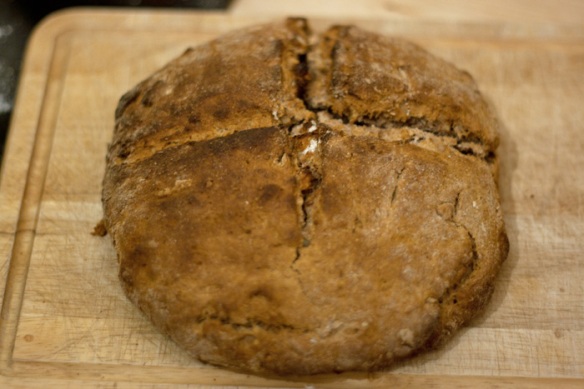 We been eating homemade bread for the best part of 3 years now (started with a bread maker and then when I got a kitchenAid I moved on to using this to knead the dough) and I have found only one downside. The more you bake your own bread, the more you realise just how much better it is than mass produced bread. Yes you can buy good bread from small, artisan bakers but we just don’t have any near us and I’m sure we are not the only ones. There are times though when I’ve been too ill or busy to bake bread and we have bought bread from the supermarket. I plan to try and get ahead and always have some homemade bread in the freezer (all the bread I’ve tried freeze perfectly) but also I want to find a soda bread recipe that I can use when I don’t have time to wait for a yeasted bread to rise. I have to admit that so far I’m not a massive fan of the taste of soda bread but River cottage Bread handbook has several recipes and variations that I plan to experiment with.

So far this year I have made the basic white soda bread with a mixture of milk and water for the liquid element (the book recommends buttermilk, yogurt, milk or water) which was ok but didn’t win me over. I plan to try it with natural yogurt next and buttermilk after that (there is also information included for making your own buttermilk which also provides you with homemade butter, that I may try at some point). I’ll spare you a picture of the basic white soda bread, lets just say it looked rustic. You can find a recipe for white soda bread from River cottage here (although its not the same one as in the bread book), I like the sound of the six seed soda breadthough in the variations at the bottom of the recipe so will have to add that to my list. This morning this recipe appeared in my google reader for oat soda bread from 101 cookbooks which I’m going to have to added to my list of soda bread recipes to try.

We went away visiting family for the weekend and got back late sunday afternoon. With no time to bake yeast bread I tried out a recipe for wholemeal soda bread with honey and walnuts. I was really looking forward to this bread but I was disappointed by the end result. For me the bread was far, far too sweet and it completly over powered the soda bread flavour. I have used honey in bread baking before with delicious results (wheatgerm and honey was delicious but I can’t find my recipe for this, if anyone has one can you please let me know) but only a couple of tablespoons for a 500g loaf. This recipe is availble for walnut and honey soda bread online here if you would like to bake it. I think that I’ll will experiment with much smaller amounts of honey in a wholemeal soda bread with and without walnuts in the near future.

My starter is now over 7 days old. I’m continuing to feed it daily and hoping to use it to bake sourdough bread soon. The recipes I have will require me to be around for the best part of a day and I just haven’t been home long enough for that yet. Hopefully this weekend.

I baked a loaf of bread from River Cottage bread yesterday afternoon. I decided to bake a wholemeal loaf but wanted something to push me a little out of my comfort zone. I picked the oaty wholemeal recipe on page 79. The book is very good at offering variations for each recipe such as extras that can be added to the dough. One recommendation that is included in all the loaf recipes is to use a piece of old dough or ladle of sourdough starter (as well as dried yeast) to add flavour. This is something that I have not tried before so I decided today was the day. I only used 4 tablespoons of starter though as I was a little apprehensive of how sour the bread would be. The loaf is baked and cooked following the river cottage basic method which I introduced you to yesterday and before baking the loaf is coated in a mixture of pinhead oatmeal, medium oatmeal and oat flakes (I only had porridge oats so I put a handful in my pester and mortal and produced a mixture of textures).

The end result was a success. The texture of the bread was just right with a good crust, the oats added a nice contrast and the sourdough starter did add a small extra flavour to the bread (I will be going for the full ladle in my next loaf). A definite bake again recipe.

Recipes I want to try