My starter is now over 7 days old. I’m continuing to feed it daily and hoping to use it to bake sourdough bread soon. The recipes I have will require me to be around for the best part of a day and I just haven’t been home long enough for that yet. Hopefully this weekend.

I baked a loaf of bread from River Cottage bread yesterday afternoon. I decided to bake a wholemeal loaf but wanted something to push me a little out of my comfort zone. I picked the oaty wholemeal recipe on page 79. The book is very good at offering variations for each recipe such as extras that can be added to the dough. One recommendation that is included in all the loaf recipes is to use a piece of old dough or ladle of sourdough starter (as well as dried yeast) to add flavour. This is something that I have not tried before so I decided today was the day. I only used 4 tablespoons of starter though as I was a little apprehensive of how sour the bread would be. The loaf is baked and cooked following the river cottage basic method which I introduced you to yesterday and before baking the loaf is coated in a mixture of pinhead oatmeal, medium oatmeal and oat flakes (I only had porridge oats so I put a handful in my pester and mortal and produced a mixture of textures). 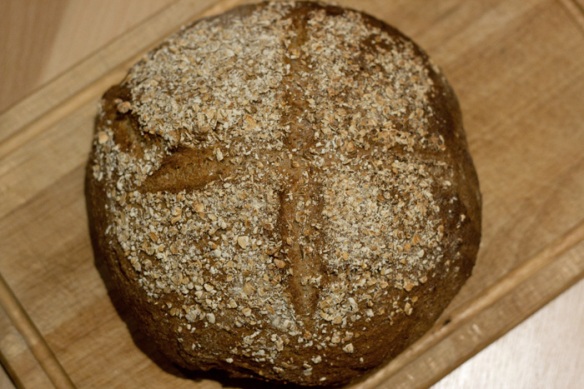 The end result was a success. The texture of the bread was just right with a good crust, the oats added a nice contrast and the sourdough starter did add a small extra flavour to the bread (I will be going for the full ladle in my next loaf). A definite bake again recipe.